With the federal government’s passage of the American Innovation and Manufacturing (AIM) Act last year, the phasedown of high-GWP HFCs such as R-404A and R-410A in commercial refrigeration and air conditioning systems is imminent. While the Environmental Protection Agency (EPA) has until October to determine how it will administer the phasedown of HFC production and consumption in the U.S. over the next 15 years, there is no question that the new regulations will affect the entire refrigerant supply chain.

For this reason, commercial refrigeration contractors and their customers should waste no time in starting to prepare for the day in which there is a reduced amount of HFC refrigerant available for use in new and existing equipment. At a recent webinar hosted by AHRI (below), industry experts shared several ways in which the commercial refrigeration industry should start preparing for the phasedown – today.

While it may seem like the 15-year phasedown of HFCs offers plenty of time to prepare for the transition, it is important to note that significant reductions in the production of these refrigerants will take place over that time frame. Under the AIM Act, EPA will gather data from 2011 through 2013 in order to establish the U.S. HFC baseline for production and consumption. Then in 2022, the available supply of HFCs will be reduced to 90% of the baseline; in 2024, it will be reduced to 60%; in 2029 it will be reduced to 30%, etc. (See Table 1.) 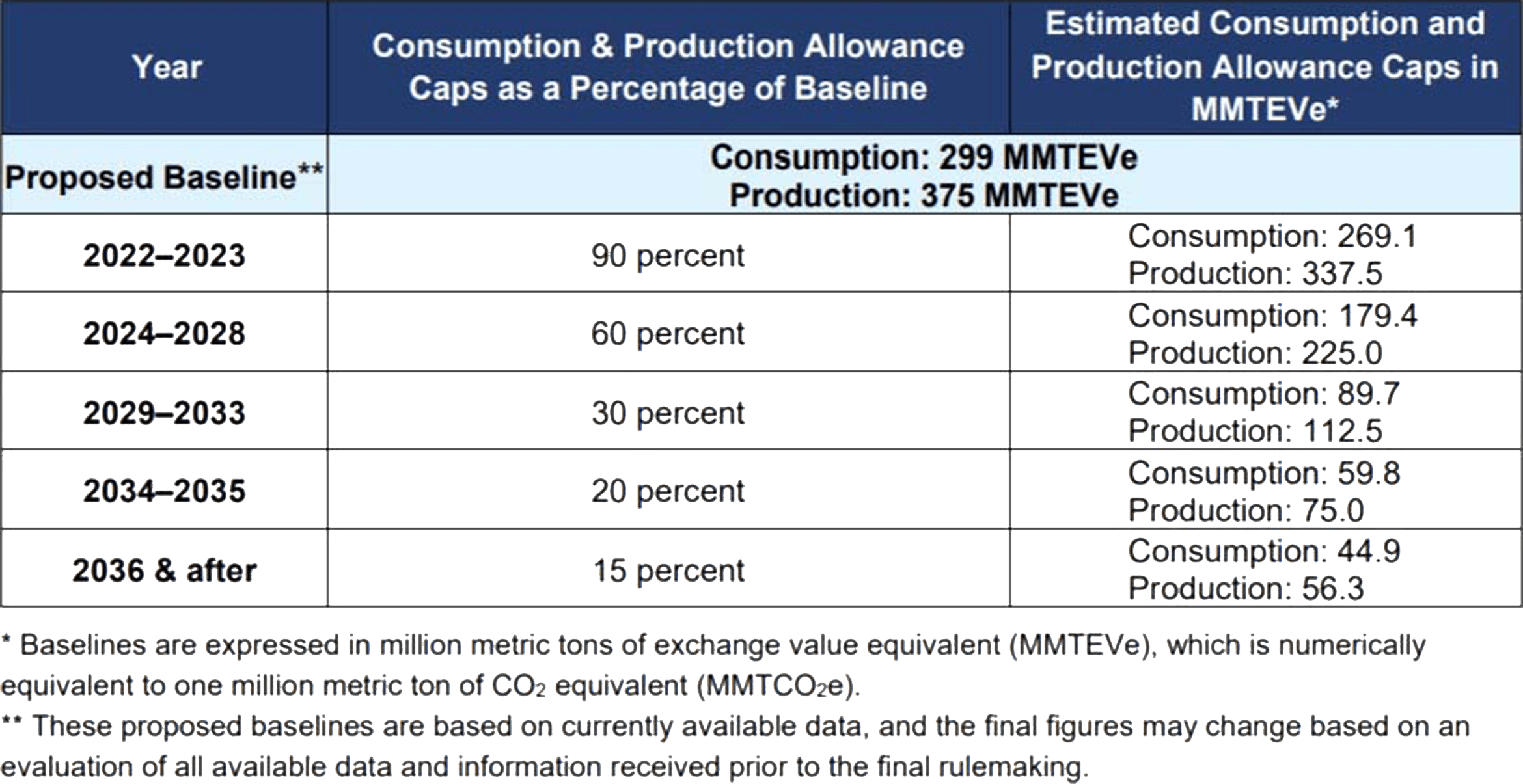 In administering the phasedown, EPA will create an allocation program, which will define the methodology used to distribute allowances as well as determine the entities that will receive allowances. As Helen Walter-Terrinoni, vice president of regulatory affairs at AHRI, explained, companies or organizations will receive a set quota or allocation of refrigerant they can produce or import. Then that allocation will be phased down over time.

“For example, if a refrigerant producer or an importer of refrigerant has an allocation for 3,922 tons of CO2 equivalents, they could import (or produce) a ton of R-404A; alternatively, they could import (or produce) a few tons of R-448A or R-449A,” she said. “They will be guided with a total basket of carbon dioxide weighted from the GWP of the individual chemicals, and they will decide how those are used. Depending on who receives the allocations will determine how things are used.”

Essentially, the HFC allocation phasedown is designed to create an economic supply imbalance with demand, said Walter-Terrinoni. “So if you think about basic economics, that means that there will be a reduced supply, there’ll be scarcity, and there will be increased prices.”

Which is why there is a sense of urgency in deciding how to approach the impending refrigerant transition.

While this may seem overwhelming, there is no need to panic, as there are a variety of options covering existing and new refrigeration equipment that can be employed to ensure a successful transition, said Rajan Rajendran, vice president, systems innovation center and sustainability at Emerson. For existing equipment, the focus should be on reducing leaks, using recovered/reclaimed refrigerant, and retrofitting existing equipment with lower-GWP refrigerants. For new equipment, consideration should be given to choosing systems that utilize low-GWP refrigerant and purchasing units that use smaller charge sizes.

“Globally, more than half of the new refrigerant GWP that is produced goes straight into charging leaking equipment,” he said. “How do we prevent this from happening? Preventive maintenance is required, which means you should be doing timely leak sensing, leak detection, leak mitigation, and taking corrective action. And when I talk about corrective action, that’s where this question of using new refrigerant or recovered and reclaimed refrigerant comes into the picture.”

Getting into the habit of using recovered and reclaimed refrigerant to service existing equipment is important, because there may be challenges to finding – or affording – virgin refrigerant once the first big production cut of HFCs occurs in 2024. In addition to reducing leaks and using recovered/reclaimed refrigerant, retrofitting existing equipment to lower GWP options should also be considered.

“If you have an R-404A or R-407A piece of equipment that has a lot of charge in it, and it has a potential for leaks and losing a lot of refrigerant, you should probably seriously look at converting that refrigerant to another A1 refrigerant,” said Rajendran. “There’s a whole sequence of refrigerants that are less than 1,500 GWP that may very well work. Of course, you need to check with the equipment and component manufacturers before retrofitting, but it is possible to retrofit existing equipment, and that needs to become part of your plan for your whole enterprise.”

When it comes to new refrigeration equipment, end users should consider buying units that utilize low-GWP refrigerants and/or have smaller charges. Both of these strategies will need to be employed, as the installation of large central systems will likely become more of a challenge in the future.

“When we start talking about lower-GWP refrigerants that are not A1, we start moving into the category of flammable refrigerants,” said Rajendran. “As we move into that area, some of these very large charge limits are no longer possible, so you are going to have to move into distributed architecture, remote condensing units, and self-contained equipment.”

Self-contained equipment is likely going to become more appealing to retailers, said Rajendran, because it is something that end users are comfortable using. However, it is not always possible for large retailers to install self-contained equipment everywhere, which is why the industry needs to look at adapting some of that technology into remote equipment.

“Self-contained equipment has managed to squeeze the most Btu or cooling possible out of one pound of refrigerant, so in a very compact form, you get a lot of Btu,” he said. “And the technology and the techniques that they’re using to do that are things that we need to migrate into remote equipment.”

As for the ubiquitous central system that utilizes thousands of pounds of A1 refrigerant, that is probably going to become history, said Rajendran.

“Whether it is a self-contained or a distributed system, we’re going to see a new category of mildly flammable A2L refrigerants being used. These are a lot less flammable than propane, but they can’t be used in very large systems.”

Change is coming, which is why commercial refrigeration professionals need to make a plan for how they will address the upcoming refrigerant transition. And doing it sooner rather than later is a prudent thing to do.

For emergency service requests, please contact the office via phone at 727-868-8586 x 101 or email dispatch1@maincomm.com.

How May We Help You?

For more information about Main Commercial Refrigeration Services, please contact us today using the form below.